As the UK summit season quickly approaches we thought it would be a good idea to talk with our friends over at Three Peaks Partnership to get an understanding of the impacts of the ‘novelty challenges’ that on the one hand bring thousands of people in touch with the U.Ks landscapes, yet can be the plight of the season for others, and that’s not entirely unjustified either – with over a TONNE of trash being collected last year from the peaks…

What was the driving force behind the partnership being founded? Was there one particular bad year for litter / mess etc or was it a slow build up of local frustrations?

Rich Pyne (Rich Mountain Experiences, Ben Nevis) was working on the Ben back in 2013 when he came across a huge pile of abandoned rubbish – an all too often occurrence. That started an idea and soon he was in touch with me (Kelvyn James, Mountain Services, Scafell Pike) and Kate Worthington (RAW Adventures, Snowdon) and together we got the ball rolling on what has become the largest organised mountain cleaning event in the UK – The Real 3 Peaks Challenge.

Without the partnership what would the Three Peaks look like?

Last year we collectively moved past the tonne collected barrier – think about that for a moment – how much does one empty plastic water bottle weigh….

My team on Scafell Pike take in excess of 50 bags down every year – but in 2016 we actually saw a slight reduction – I think that is down to a combination of now knowing where to look, having gotten the really old stuff off the hill – and the message getting out there.

Pictured below is the first haul from 2013 which inspired the creation of the partnership…and we can see why! 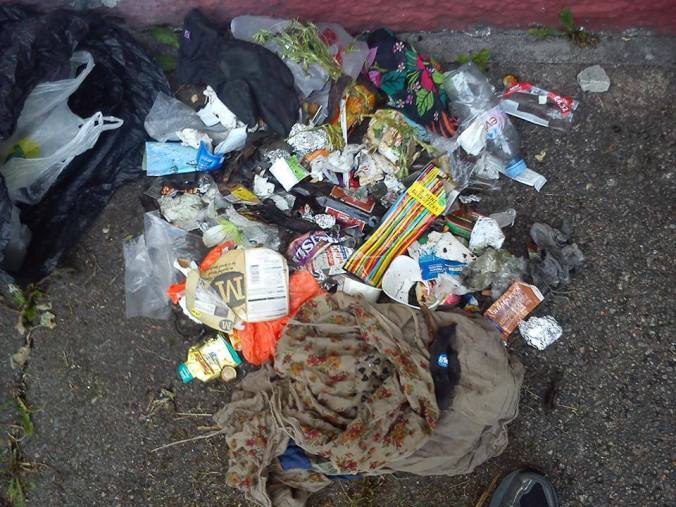 Why do you think there is an issue with litter / misuse of the peaks, education, attitude etc?

There’s no simple answer; many events are now encouraging people into the hills who simply aren’t equipped mentally or physically – and often they just don’t know or understand the impact that dropping litter has. I think (& I base this on comparison to the work I do oversees) that we are still along way behind in educating clients and the general public on the wonder of our natural environment – how special it is – and the part we all have to play in keeping it so. (Check out some of our posts on Ben Nevis & Snowdonia to see what’s on the doorstep!)

Do you think that mass ‘challenges’ can dilute the authenticity of our summits; or are they a force for good in opening the eyes of the masses to the incredible landscapes on offer in the UK?

Anything we do to offer, develop or encourage a love of the outdoors in our clients, friends or strangers is a good thing – interaction with nature should be a key part of everyone’s lives – the challenge is to do so responsibly.

But – the quick fix nature of the way many challenge events are promoted is counter productive to this – and oddly it’s probably also poor business!

Having made well over a hundred ascents of Scafell Pike I can tell you that the middle of the night is not the best time to climb England’s highest point – instead I’d rather encourage clients to take their time, to spend some additional time absorbing the area – maybe wandering slightly off the beaten paths, spend some money in the local businesses – take the time to fall in love – so that they come back again – rather than looking for the next 24hr fix.

What’s the first thing someone planning the 3 peaks challenge should consider to keep their visits as Eco friendly as possible?

If you carry it in – carry it out.

So..how can people get involved?

Visit our Facebook Page – work out which mountain you’d like to come help out on, gather up your friends – and get in touch, we’d love to hear from you.

So go for it…sign up and take on The Real Three Peak Challenge – or take on some of the cracking advice here, take your time and learn to fall in love with your own backyard (Unless of course you’re not based in the U.K. – in which case come along and see what we’re hiding over here!)